RS232 is a telecommunications standard to allow point to point transmission of data from one piece of equipment to another. Data is framed and sent a single data bit at a time over dedicated transmit and receive lines. Each frame can have an optional parity bit added and can contain up to 8 data bits. 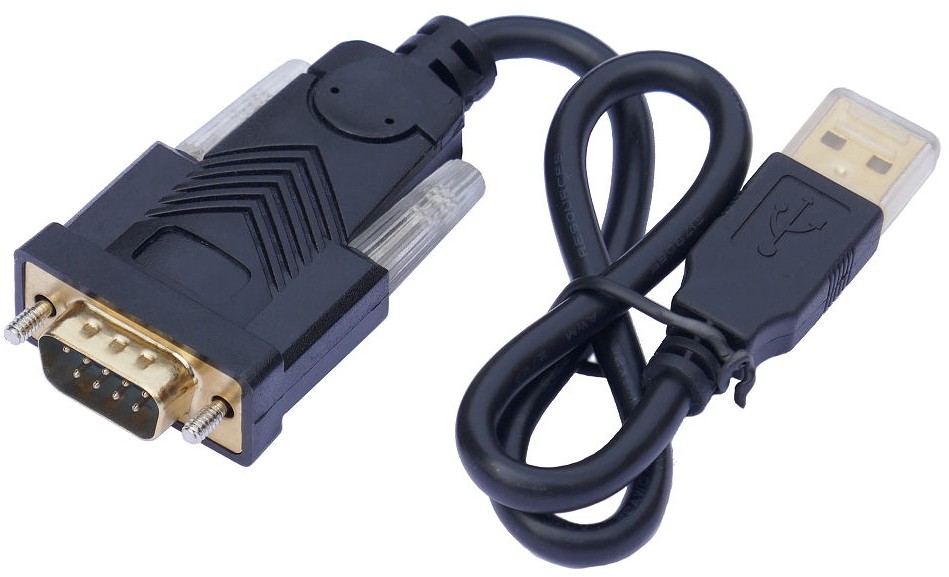 Most PC and laptop computers used to provide an RS232 serial port interface and some were even fitted with printer parallel port interfaces. However, most modern PCs and laptops no longer have such ports fitted and rely on externally plugged in USB adapters to provide RS232 and older legacy hardware interfaces.

Signals are transmitted over an RS232 link with reference to a common ground connection. All RS232 line level signals (including all handshaking signals) are bipolar meaning they use negative and positive voltages to denote logic ones and zeros.

A single bit of data is represented by transmitting a logic 0 (called a 'space') as a positive voltage in the range +3V to +15V, and a logic 1 (called a 'mark') as a voltage in the range -3V to -15V and holding on to that voltage for a specified amount of time. This single bit time delay defines the rate at which data can be transmitted over an RS232 link. The rate is defined in terms of the number of bits per second transmitted, or 'baud rate'.

When a transmitter signal is not in use, it is parked in an idle state ('mark' condition, logic 1). The line remains in this idle state until the next transmission is required at which point a dummy 'start bit' ('space' condition, logic 0) is inserted before the data bits to define the start of a data frame. A frame consists of this start bit, a number of data bits, an optional parity bit and 1 or more stop bits (which are bits always set to the idle state).

The following example shows an RS232 line level data frame transmitting the ASCII character 'A' with even parity. The ASCII character 'A' has a decimal value of 65 (41 in hexadecimal, 01000001 in binary). Data is normally transmitted least significant bit first although the official RS232 specification does not require this to be true in all cases.

Although the RS232 specification states a transmitted signal magnitude of up to 15V, all RS232 signal receiving circuits must be designed to accept signals in the range -25V to +25V.

The number of data bits in a frame is normally fixed at 8 but can range from 5 to 8 for specific applications (e.g. some older printing devices support 7 bit ASCII data).

The parity bit is optional. It appears only if the parity setting for the serial port connection is not set to 'None'. The following table lists the current parity settings available.

It is extremely important to configure your equipment that generates and receives these RS232 signals to have exact matching serial port settings (e.g. the setting of baud rate, number of data bits, parity and the number of stop bits). If the settings mismatch, valid data communication will not be possible.

The following oscilloscope capture shows the two types of RS232 signal for the same transmission. One at RS232 line level and the other at CMOS 3.3V UART level for the transmitted ASCII sequence 'ABC' at 115200 baud, 8 bits, no parity and one stop bit. Note the inversion between the two waveforms. 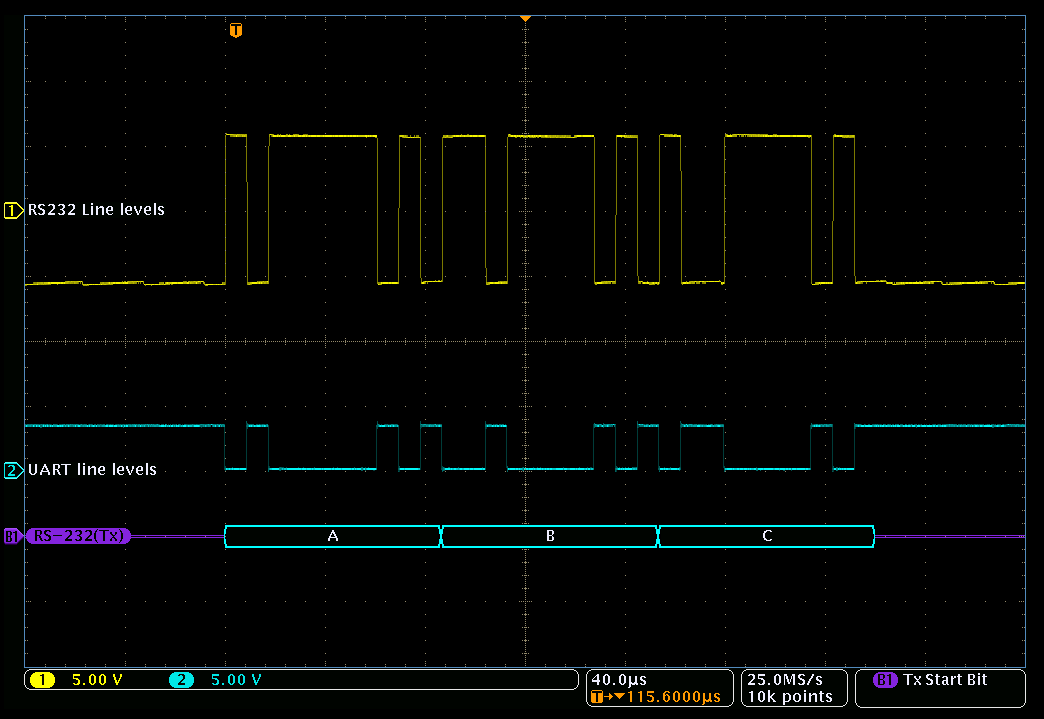 The handshaking lines control the flow of data so that transmitting equipment knows when receiving equipment is ready to receive more data. Note that all of our AntiLog data logging products are always fast enough never to need handshaking signals to hold off incoming data.

In most cases, a simple 1:1 wired cable can be used for plug to socket connections but if both pieces of equipment have the same connector type fitted (e.g. both have plugs) then the required crossover cable is called a 'null modem cable'. The following diagram shows a fully specified null modem cable using two 9-way D-sub connectors. 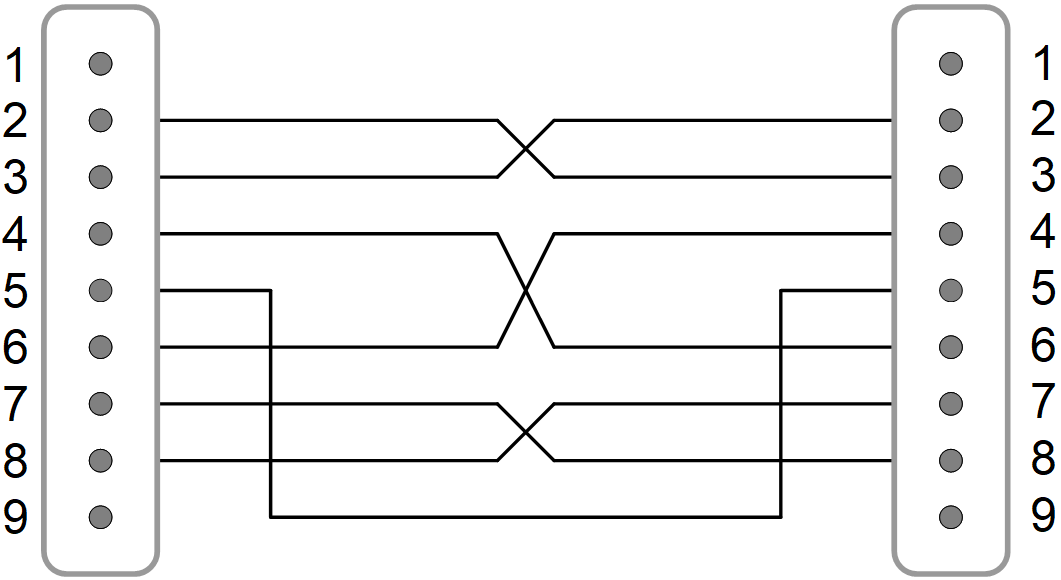 If hardware handshaking is not required in a link, a null modem cable can be constructed using just three interconnecting wires and some local loopback handshake connections. 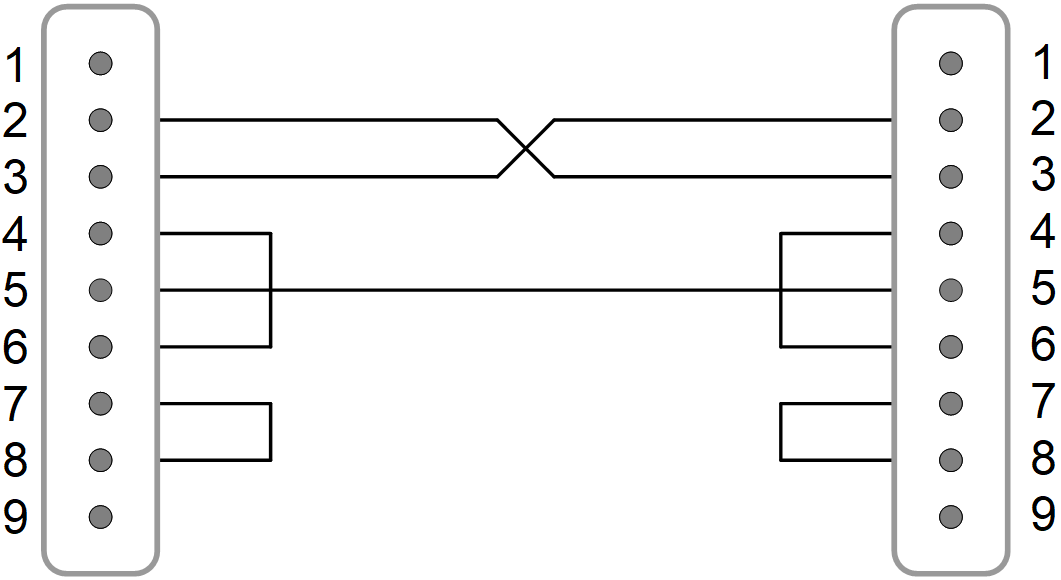 AntiLog and AntiLogPro data logging products only require a null modem cable with the basic three wire interface and loopback connections at the data source end only. 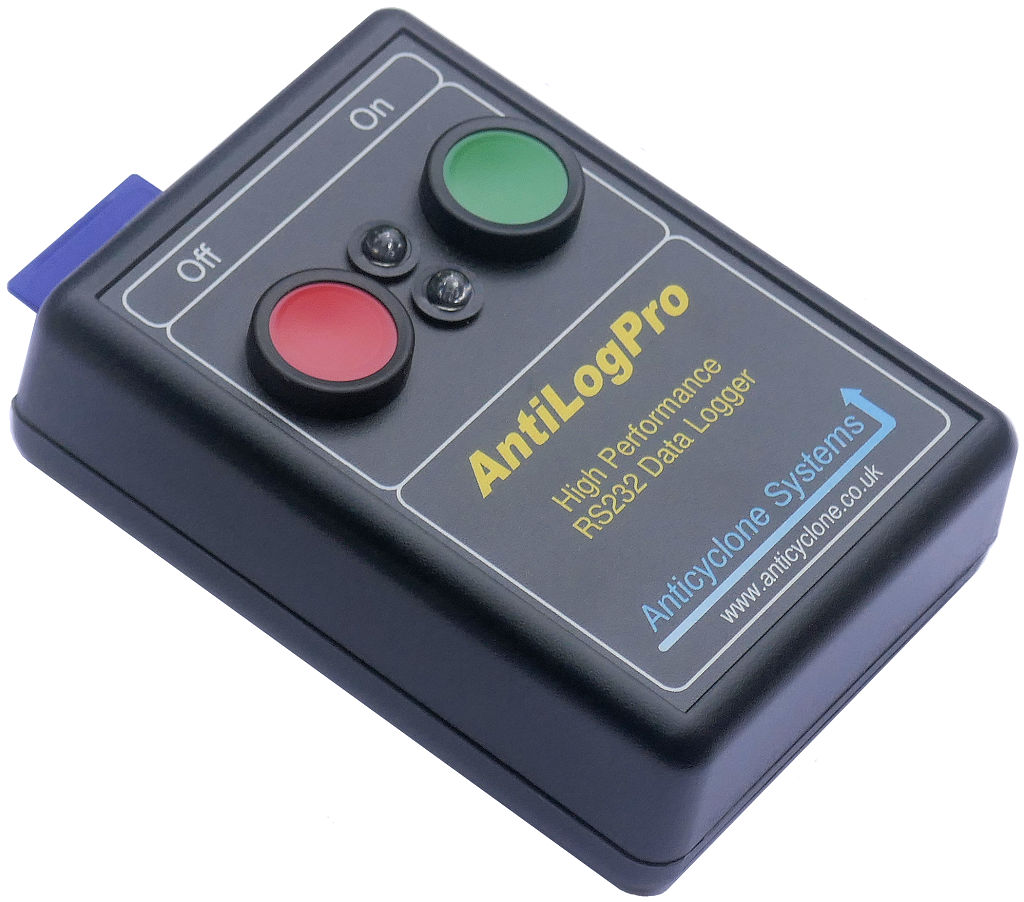 To log transmitted RS232 signals, you need to know if the signals are at RS232 line levels (e.g. from a PC) or at UART logic levels (e.g. from a GPS module or direct from a microcontroller). If you use an AntiLogPro data logger for example, you can individually configure the main 9-way D connector receiver lines to be inverted or non-inverted to log both types without the need for any extra hardware or line level conversion.